The journalists in Myanmar will steal your heart. I know of no where else where journalists are paid so little (about $50 per month) for working six-day weeks in a society hostile to news gatherers only to have about half of what they write spiked by government censors. And yet Myanmar journalists get up in the morning, take that hour-long, cramped bus ride into the city, and go at it again. Often I feel they have more to teach me than I them. I have had five training missions to Burma since 2008 sponsored by the U.S. Embassy. As of September, 2011, things appear to be changing for the better for Myanmar journalism, but as any local reporter will tell you, they’ve seen the noose loosen before only to have it yanked tight again without warning. We’re all hoping that this time it will be different.

This young reporter for the “Snapshot” journal participated in the first Myanmar Writers and Journalists Association workshop. He later filed a story that – to everyone’s amazement – resulted in corrective action by the authorities. The story was about a doctor who had misdiagnosed the condition of a young woman, who later died of acute appendicitis. The story cleared the censors because the man charged with cutting it had experienced a similar loss of a relative and believed the people should read the story, according to the reporter. Days later, a medical board suspended the doctor’s license. This result was previously unheard of in Burma. 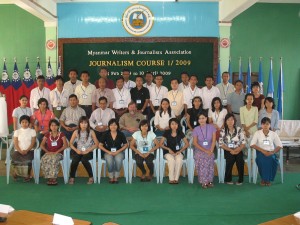 Graduates of the first "official" training course that included a Western trainer.

Previous to this 2009 workshop for members of the Myanmar Writers and Journalists Association, journalism  training inside Myanmar was a secretive affair often conducted under the guise of English lessons. With the help of one of my former students, we were able to offer these 36 journalists training in basic skills in the open. As there were some government journalists present, the course was not without controversy. There were those who said we were giving comfort to the junta. But after consultation with leading Myanmar editors and concluding that journalism practiced at the highest standards can never be used for oppression, we decided to go for it. It was the right decision. Many of the participants of those three workshops are standouts in the field. Two of the participants in this photo were special political police officers — the ones who arrest journalists — there to file daily reports on our activities. This actually worked to our advantage, as in Burma rumors about what we might be doing were more dangerous than what we actually were doing. One of these guys was also among the most enthusiastic participants in the course.  People and events in Burma are never black and white.

"What are the most important issues for you in the coming election?"

The ability to train journalists openly allowed this field trip to a nearby pagoda where workshop participants tried to identify the people’s issues prior to the November 2010 elections so that they could craft better questions for candidates. Sadly, most people told them that they had no interest in the elections, and as the last election in 1990 was hijacked by the prevailing authorities, it was hard to fault them. But some did have issues, the most common being their economic hardships. 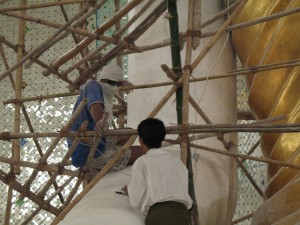 "Excuse me, sir. Could I ask you a few questions about the election?"

This participant on the same field trip reached new heights to get a good quote from a workman restoring a giant Buddha. 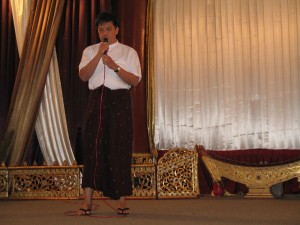 Myanmar is dripping in irony. This gentleman’s name is Tint Swe, then the director of the Press Scrutiny Board, the government body that has prior censorship power over every word written in Myanmar. Most of the journalists in the room fall victim to his censor’s red pencil every day. Yet many if not most Burmese journalists respect him as a man who is doing his best for them under the circumstances. There are two ways to work for positive change in a place like Myanmar – from the outside and from the inside. I believe both are legitimate and necessary. In September, Tint Swe went on record saying he believed censorship is inconsistent with Democratic values and predicted his office would soon be obsolete. If this comes to pass, the new system of self-censorship will present its own challenges that some in Myanmar believe could be potentially worse for press freedom in the short term. 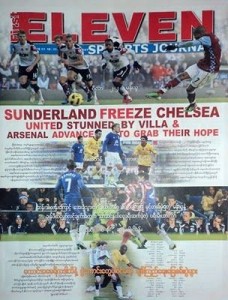 Top this for chutzpah.

Testimony to Myanmar journalists’ determination to get news copy past the censors, this edition of a popular sports journal was published soon after Aung San Su Kyi’s release from house arrest. The journals were forbidden to report on the event. So First Eleven wrote this headline, submitted to the censors in black and white. Later printed in color, the light red letters spell “Su Free, Unite and Advance to Grab the Hope.” 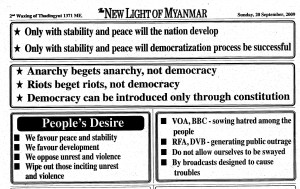 Admonitions were until recently a staple in the government daily newspaper.

My personal favorite is the “People’s Desire.” For years, every newspaper in Myanmar was required to run these messages in every edition, although the independent journals were more discreet about placement than the New Light of Myanmar. In September 2011, the authorities lifted this requirement. Authorities also say that they soon will grant daily publishing licenses to some private journals, a privilege heretofore granted only to government papers. 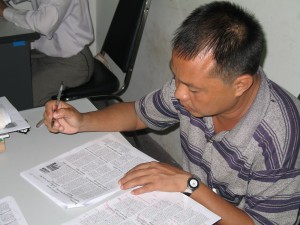 Doing it the hard way.

This editor at 7-Day News, the nation’s largest private news journal with about a 100,000 circulation in July 2011, is editing copy with a pencil. At many journals, reporters write their stories in longhand, and typists put them into a computer. All-electronic newsrooms are rare, but they are coming as circulations increase across the board. Unlike in the United States, print journalism is booming in Myanmar. 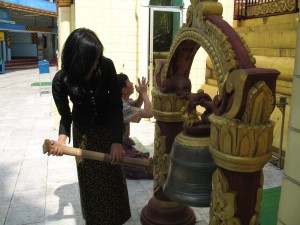 A young woman sounds a pagoda bell after collecting merit at Sule Pagoda in Yangon.

Burmese Buddhists believe that having collected merit at a pagoda through a series of ancient rituals, the ringing of a pagoda bell spreads that force for good throughout the universe. May the collective merit of Myanmar’s journalists ring throughout the land, bringing the freedom to print the news that they so deserve.