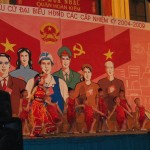 One of my most lasting impressions of Hanoi in 2004 was the omnipresence of the national flag. It seemed to be everywhere, like portraits of the Shah of Iran before the revolution. But whereas the Shah’s photos were hung in fear, the gold star on the red banner flies with almost universal pride in Vietnam. As a citizen of the vanquished side of that terrible war, I wouldn’t argue for a moment that the Vietnamese have much to be proud of, including the Vietnamese journalists, who mostly stand as erect as anyone else before the flag. But working with journalists who find it unimaginable that their government could be as deceitful as other governments, for example, takes some getting used to. One Vietnamese reporter participating in a Phnom Penh workshop refused to believe that his country’s army was persecuting ethnic Hmong people, turning them out of Vietnam to live out their lives, raise their families, on the run in the Lao wilderness. Even as the editor of the respected Cambodian Daily newspaper showed him photos and stories he had gathered in recent contacts with Vietnamese Hmong, the Vietnamese journalist steadfastly proclaimed it was not true.  Journalism trainers can’t change minds not yet open to change, but there remains plenty of common ground for training – like crafting stories that are accurate, fair and balanced. And as Vietnamese journalism evolves, as U.S. journalism has evolved over the past 300 years or so, the environment will better reward the opening of minds. There are plenty of talented, dedicated Vietnamese journalists to shepherd the craft into the future. I had the privilege of co-training, with Rick Hornick, the top reporters and editors of the Vietnam News Agency to in turn train their staffs in the fundamentals of reporting and writing. The course was organized by the Independent Journalism Foundation of New York. 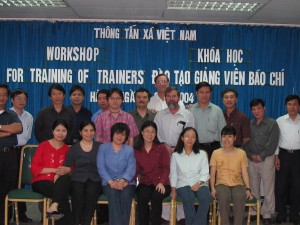 Graduates of the Vietnam News Agency "training of trainers" course.

Some of these veteran journalists were war correspondents during the “American War.” As with every Vietnamese I have ever met, they bear visiting Americans no ill will. These are the leaders of the Vietnamese news media. 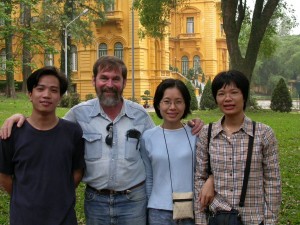 Former IJF students Kien, Son and Hahn show me around the grounds of Ho Chi Min's former headquarters in Hanoi.

One of the joys of this business is keeping in touch with former students and colleagues. Some of them go on to become media leaders in their countries and to facilitate more training. Others go on to pursue other dreams. As teachers, we journalism trainers are lucky to have the opportunity to touch so many lives, often profoundly. 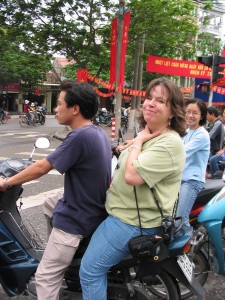 This shot has little to do with journalism, but is noteworthy as it records my colleague Michelle Foster, who beat cancer and formerly was VP of marketing for the Gannett news chain, as she conquers her fear of riding on the back of a motorbike. Michelle was in SE Asia as a Knight International Press Fellow helping publications on the business side of journalism.