For 15 years until March 2009, the Indochina Media Memorial Foundation was the most loved and respected journalism training organization in Southeast Asia. There were bigger outfits, but none made more of an impact on raising journalism standards, I believe, than the IMMF. The participants came from Cambodia, Laos, Vietnam, Burma and Thailand. A disproportionate number of graduates of the four-week courses held in Thailand became leaders in their countries’ media. Ask any IMMF alumni what the course meant to them, and you’ll likely get a moment of silence, then a reverent description of their memories, especially of Sarah McLean, called by many the mother of Southeast Asian journalism. I had the privilege to train in IMMF courses in 2005 and 2008. 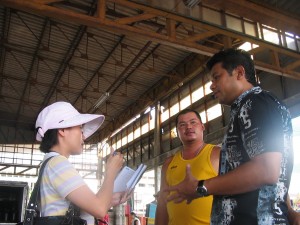 An IMMF journalist from Vietnam interviews dock workers on a Thai commercial fishing wharf about conditions for migrant workers, especially those arriving from Burma.

Each IMMF course had a theme. This one was migrant labor, and the plight of mostly Burmese laborers working mostly illegally in Thailand. The participants learned the macro story of migrant labor from visiting experts, but also collected stories from the laborers themselves, from exploited fishermen to women who risk pneumonia standing long hours over a mountain of ice peeling shrimp. I learned that it’s easier for them to peel shrimp completely than is it is to produce “easy peel” shrimp, but American consumers apparently like to do the last bit of peeling themselves. 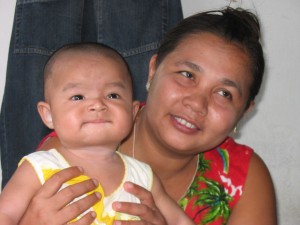 One of scores of stateless Burmese babies born in Thailand.

The idea of the IMMF courses was not only to increase the journalists’ skills but to give them a new area of specialization, like migration, that they could take home and put to work. Some wrote stories about babies born of Burmese mothers living illegally in Thailand. These children were neither Thai nor Burmese. They had no passport, no citizenship. Their futures would not be easy. 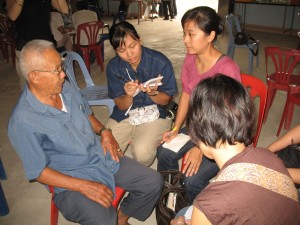 This 2008 IMMF course, the last, focused on the aging population of Southeast Asia. The participants explored the challenges an aging population brings to governments, local communities and older people themselves.

Graduates came to think of her as their journalistic mother, and more.