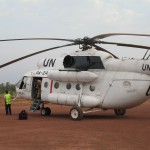 working in the world’s newest nation face about as many challenges as one can imagine: lack of skills and experience, poor infrastructure, a society unused to being interviewed for broadcast or print, a meager advertising pool, and the threat of jail or worse by disgruntled government officials. Still, as everywhere else in the world, there are selfless souls who are willing to take on one of the most critical jobs to be had in a democracy. I spent three months in Juba in 2011 just prior to independence converting the Miraya FM newsroom to a news beat structure and training radio journalists. I returned in March 2012 to follow up that work. 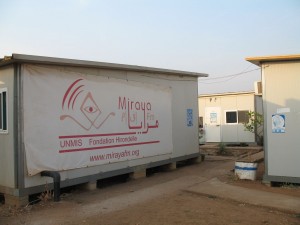 A collaboration between the Hirondelle Foundation and the United Nations Mission in Sudan (now Mission in South Sudan), Miraya FM’s original mission was to report the news while supporting the peaceful transition to two nations. Now the station also focuses on giving citizens of South Sudan the information they need to build their new lives and their country. The station broadcasts from UN compounds across the country and is the No. 1 source for news and entertainment for most South Sudanese. 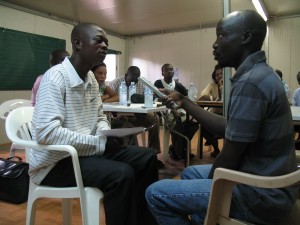 Government journalists in Yambio practice their interviewing skills substituting a tv remote control for a recorder.

Part of Miraya’s mission is to strengthen the competition, in this case journalists for the state-owned radio network. I conducted workshops for government radio journalists in four state capitals: Rumbek, Malakal, Yambio and Wau. The participants were eager to learn new skills, even though they knew they probably would not be allowed to use them on air, at least not yet. 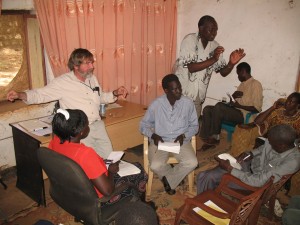 The journalists who attended this basic skills workshop in Wau (pronounced “wow,” confided that their government station was on air for only four hours a week — no diesel to power the generator. It didn’t bother them that some local public officials had plenty of fuel for their new official luxury cars. They didn’t yet recognize this as news. It’s going to take some time to wean these journalists off of the absolute respect for their superiors that most learned during lifetimes of war. 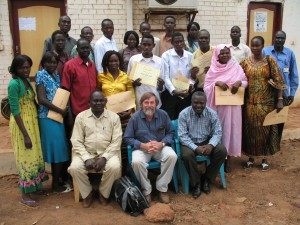 The journalists of the South Sudan Radio and Television (SSRTV) station in Wau gather for a group photo after receiving their certificates. It’s funny how the VIPs (flanking the trainer) always manage to show up just for these moments. 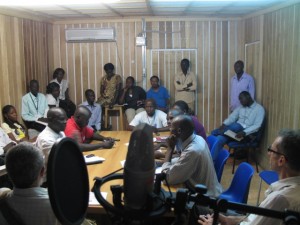 Miraya Reporters come together each morning to offer story ideas from their news beats and receive tips from colleagues and editors on additional sources and on how to make their stories stronger. At meeting’s end, the editor compiles the news agenda for the day’s broadcasts. News meetings are the most important time of the news day, the nexus of ideas and energy that will power the day’s message to the listeners.

Two Miraya news stories that made a difference: 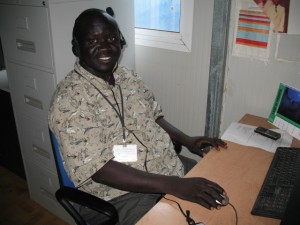 Journalist Chance Baniko at his desk in the Miraya newsroom in Juba, March 2012.

Last June, Miraya reporter Chance Baniko got a phone call from a source in the Human Rights Commission.  The commission had a report that a young woman had been tortured under interrogation by police. It sounded bad. Later that day, when Baniko visited Juba Prison to report on another story, a source there confirmed the torture story.

The prison source, who had come to trust Baniko as worked the prisons beat, told him that the woman was to be transferred to the prison from a Malakia jail cell that day, and she invited Baniko to accompany her on the transfer. The original source from the Human Rights Commission joined them.

They picked up the girl, aged 20, at the police station, and on the way to the prison Baniko interviewed her in the car. She told him about how a Darfuri businessman accused her of stealing $20,000 from him, and how the police brutally, sexually assaulted her to coerce her to confess. Baniko later interviewed the doctor who removed two bottles and two lemon-sized stones from her uterus. He got a sound clip from the Human Rights Commission official on the same ride. To balance the story, Baniko called the police for comment and was assured that if anyone had been broken the law, they would be held accountable. The story aired the same day.

“We were the only ones to get the story,” Baniko said.

Minutes after the broadcast, a representative from President Salva Kiir’s office phoned the station, outraged, to ask for contact information of Baniko’s sources. The following day, the police station chief and four officers involved in the interrogation were arrested. Miraya reported the arrests.

Baniko handed the story over to reporter John Lomoro, who followed it on his beat – human rights. He reported that the charges against the woman had been dropped and followed the story as the South Sudan government paid for her medical treatment in Uganda for injuries she suffered at the hands of the police.

Miraya court reporter Merio Jimmy is following the case through the courts. Three of the police officers face charges for the assault.

Had Baniko and his Miraya colleagues not been on the story, the outcome for the woman, and for the officers, could have been very different. 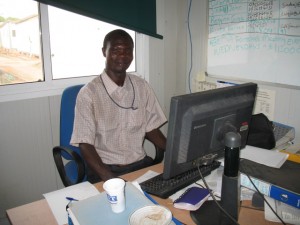 Not much gets by Miraya reporter Robert Otto, who covers higher education for Miraya.

The following piece on access to news sources is excerpted from the Miraya Mirror, an in-house newsletter published by the Hirondelle Foundation:

“What are you doing here?” the security officer barked at Robert Otto as he interviewed students at Juba University in February.

Otto showed the guard his Miraya ID and tried to explain. The guard was not satisfied.

“Come with me,” the uniform said, and led Otto away.

The guard told his superior that he had caught this nosy reporter interviewing students without permission. Again, Otto explained that he was not aware that he needed permission to talk to students. Again, the authorities were not satisfied. The next stop was the office of the chief of security. Things seemed only to be getting worse.

“Why didn’t you get permission?” the Big Man demanded. Again the explanation, which again was insufficient. “You must have permission from the Dean of Students,” the Big Man said. At that moment, Otto knew he was safe.

The Big Man’s words “were like throwing fish into the water, thinking they will die,” Otto recalled. “The Dean of Students is my friend.”

Otto did not know the dean of students when he took up the higher education beat last year. But over the course of his reporting, the dean saw that he was dedicated to covering the university with accurate and balanced stories. The two had built a relationship based on trust. As a result, Otto gained access – deep access – to the key players at Juba University and in the higher education community. His sources call him regularly to alert him to possible stories.

A week after I wrote this, a fight at a football practice at Juba University cascaded into a wider campus conflict along tribal lines that caused the evacuation and closure of the school. Robert Otto was the only journalist with enough access to get the story.