I was a Knight International Press Fellow in Romania during the 2002-03 school year. Not yet having a digital camera, the photo below is pretty much all that I have of that year with these fantastic University of Bucharest students. They were specially selected from the third-year UB journalism class to participate in this intensive program sponsored by the International Journalism Foundation at its Bucharest outpost, the Center for Independent Journalism. We covered reporting and writing, newspaper production and layout, media law and ethics in class. The students applied what they learned as staffers of The Bullet, a 16-page student newspaper published in Romanian and English. The spunky little monthly paper was published at journalism standards higher than the national dailies, which often followed our stories. Two of the students pictured below, Luiza and Ruxi, went on to get master’s degrees at American universities. Cristian Lupsa, a graduate of the previous year’s program who so loved The Bullet that he became my trusted advisor, also earned a master’s at the University of Missouri and was the editor of the program’s daily newspaper in Columbia. 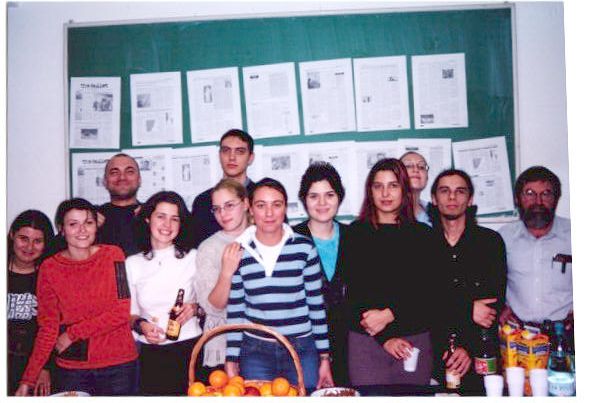 The special class of University of Bucharest students stand proudly before pages of their first issue of The Bullet, their student newspaper.

These students grew up under the despotic, eccentric rule of Nicolae Ceascescu, who met his end on Christmas day, 1989, at the hands of the Romanian “revolution,” 12 years before our class convened. I recall Ruxi telling me that her family dispatched her to stand in a long line for the weekly allotted onion. Most experts say that the Romanian mass media was created in a fever after the revolution by folks who knew only the Communist model of the press and who could afford to put together a newspaper or broadcast outlet. These people had in common a lack of familiarity with fact-based journalism and how it serves to promote democracy. The result was media dedicated mostly to the whims of owners who were less interested in turning a profit and serving the public than influencing government and business to serve their private agendas. As a rule, professional and ethical standards took a back seat to achieving owners’ personal goals. It was difficult to practice what we preached in class in the Romanian workplace, a fact not lost on the students. 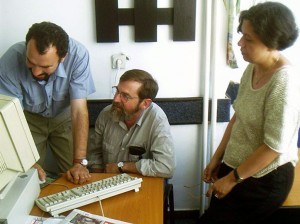 Nicoleta Bichescu (left), editor-in-chief of Ziarul de Bacau, observes a colleague and I during a consultation.

I was also able to train and consult in universities and newsrooms across Romania and Moldova. Unsung journalistic heroes can be found in every corner of the globe, including in a small Romanian town called Bacau. When I first met Nicoleta Bichescu, editor-in-chief of Ziarul de Bacau, a young independent daily in 2003, she told me, “I want to bring democracy to Bacau.” By the end of a week of newsroom consultations, I had begun to appreciate the measure of that task. The city was firmly under the thumb of a strongman mayor. His mother, formerly a ticket-taker for the public bus service, now owned it after the mayor privatized it. His brother had an uncanny knack at winning public construction contracts. The mayor also owned the competing newspaper, which had twice the 3,000 circulation of Ziarul de Bacau, as well as the local radio and television stations and newspaper distribution network. Ziarul was the only voice of opposition, and the local government did everything it could to silence it. City Hall cancelled Bichescu’s press accreditation three times. She and other Ziarul de Bacau journalists were denied access or booted out of public meetings while reporters for the mayor’s media outlets were granted access. Local businesses dared not advertise in Ziarul for fear of official retribution. The paper was refused licenses for outdoor advertising and forbidden to promote itself with banners in public places. Official harassment also got personal. Public officials and their supporters threatened Bichescu, her family, and other Ziarul journalists and their families with physical harm if they persisted in running stories critical of the administration. There were also carrots to back up the sticks. The mayor offered Bichescu a flat and a job with a fat salary if she’d leave Ziarul and come to work for his newspaper. He also offered her a cushy job as head of public relations for the city. She and other Ziarul journalists, who received similar offers, always refused – this in an environment in which journalists earned about $140 a month. The paper survived 10 defamation lawsuits filed by the mayor and other government officials. “The financial issues and the diminished access to public information have always made the Ziarul de Bacau team determined to fight for democracy, freedom and independence so that our readers can find in our newspaper correct and accurate information,” Bichescu said. “Our fight was not a personal matter, but (was grounded on) our fair belief that we can do our jobs in a strict and correct manner.” The people of Bacau voted to unseat the mayor in June 2004 elections.

One Response to Romania