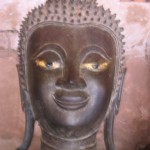 Laos in 2004 and for some years after presented a mighty challenge for journalism development. Despite all the efforts of good training organizations like the Indochina Media Memorial Foundation and Independent Journalism Foundation, Lao journalism seemed frozen in time by design (read government design). The Communist leaders in Laos keep journalists on a very, very short leash. We can teach them how to report and write a solid news story, but the chances of their being allowed to do that back home are slim to nil. There are rumors of change these days, but I’m skeptical. Despite the absence of press and other freedoms, the Lao people are among the most gracious I have encountered. On assignment for the Independent Journalism Foundation, I conducted a two-week training in Vientiane for members of the Lao Journalists Association in 2004. 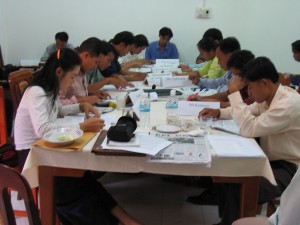 Lao journalists scour the local papers during a training session in Vientiane.

These Lao working journalists eagerly absorbed each segment of the course. One young man, however, kept falling asleep at the table while I was presenting. When I chastised him, his colleagues defended him, telling me that he awoke very early each morning to distribute his newspapers before class. That’s what I loved most about my Lao colleagues – they took care of each other. 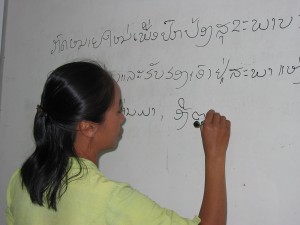 Writing the lead in Lao.

One of the great challenges of journalism training is working in translation. It takes about 40 percent longer than working in a common language and limits the amount of territory that can be covered. A good translator can make the difference between a successful or failed workshop. Then there are the zingers. My most respected translator colleague in Burma once misunderstood another trainer’s introductory words to her young class, “I’m going to treat you all like adults,” and translated this as, “I’m going to treat you all like dogs.” Most people just thought it was funny, but the poor guy got fired on the spot. 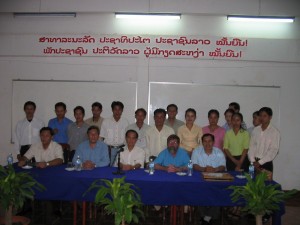 Another reassuring sign that we’re all fundamentally alike, no matter where we come from, is the undeniable desire to pose for a group photo at the end of a course. 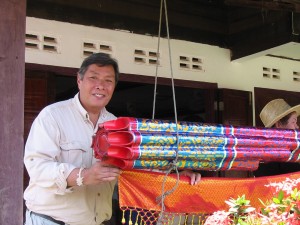 Michel Druout stands next to a friend's entry into the local rocket festival.

This gentleman is Michel Druout, perhaps the most influential player in the Lao media. He is a gracious man, raised of Lao and French parents in France before returning to Laos as an educated youth. As he tells it, he was doing the hippy trail when he crossed paths with the Pathet Lao in his ancestral homeland and decided to stay and help them build a new nation. He has been instrumental in developing Lao National Radio, founded the English-language Vientiane Times and is a friend of journalism, in as much as that is possible in Laos.