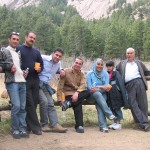 In league with the University of Colorado School of Journalism and Mass Communication, I won a $190,000 grant from the Academy for Educational Development in 2005 to train 13 Palestinian print, television and radio journalists from the West Bank. The six-week project was called “Commitment to Peace through the Fourth Estate,” and was conducted mostly in translation. The participants worked on their journalism skills in class and at regional newsrooms and broadcast studios, but also learned something about American democracy by attending a city council meeting that went past midnight. I and two co-trainers learned a lot about Palestine without having to visit there. During the workshop, a participant’s father, a farmer, was shot in his field in the gut by an Israeli soldier under circumstances that were not clear. A woman participant, 7-8 months pregnant, told us her husband was in an Israeli prison and would not see his daughter born. We had to take three of the participants to the emergency room when they suffered heart palpitations and shortness of breath. The doctors found nothing wrong with any of them. Our best guess was that the shock of coming from the stress of the West Bank to the comparatively stress-free environment of Boulder, Colorado, was behind the symptoms. 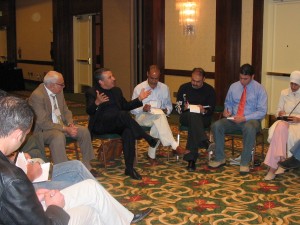 The participants have an informal chat with New York Times columnist Thomas Friedman, dressed in black third from left.

Co-trainer Michelle Fulcher, formerly of the Denver Post and now a Colorado Public Radio producer, arranged this meeting — a great stroke of luck. 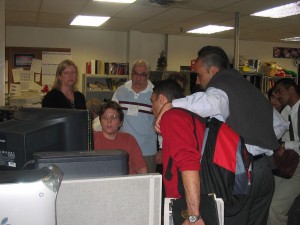 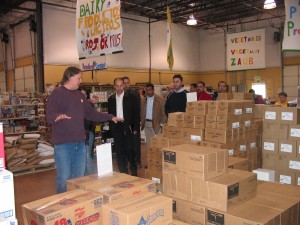 Participants get a tour of the Community Food Share warehouse.

We tried to offer the journalists a wide range of experiences that might generate story ideas back home. In this case, it was the Boulder community’s attempt to feed its hungry citizens by forming a non-governmental organization. 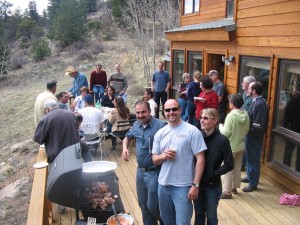 Journalists and neighbors enjoy a barbecue at my place in the hills west of Boulder.

This was a chance for the journalists to unwind and meet some ordinary American folks, my neighbors and friends. 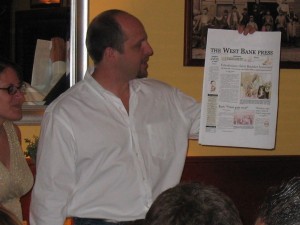