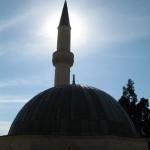 A colorful and ambitious American journalist named Drew Sullivan founded the Center for Investigative Reporting (CIN) in Sarajevo in 2004. A non-profit, CIN relies on grants to pay its bills and staff of investigative reporters. It gives its stories to the news media free of charge. The team, composed of Muslim, Serb and Croat journalists, takes on some mighty meaty stories, of which you can imagine there is no shortage in Bosnia. The reporters mostly go after corruption and organized crime. I spent 11 weeks with the staff as a consulting editor in 2008. Sadly, I have no photographs of the news operation, and I will spare readers shots of friends and I on the beach. Check out CIN’s Web site (www.cin.ba). Click on the British flag icon for English.